Carlow-based Cyc-Lok is looking to expand internationally.
Much has done to encourage the public to get on their bikes, such as the Government tax-incentive cycle-to-work scheme, which is all well and good if your bike is still where you left it for your ride home. Bike theft is now a huge problem in Ireland, especially in the cities.

During the launch of An Garda Síochána’s Lock it or Lose campaign last week, it was reported €2 million worth of bikes have been stolen in Ireland since 2016. Gardaí are encouraging cyclists to invest in heavy-duty locks but one Co Carlow company is taking things a little further. 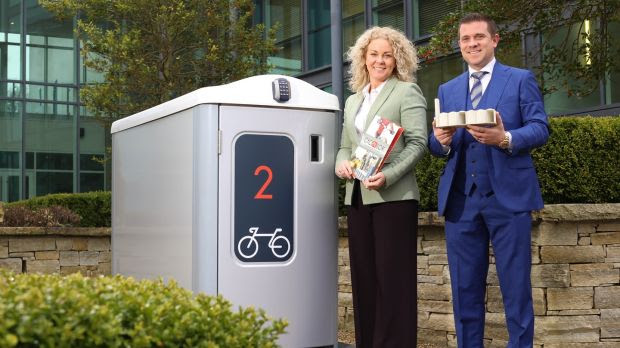 Cyc-Loc founders Louise and Stephen Murphy. The company began operating in 2014 and since has won awards for start-up and design. Photograph: Martina Regan

Louise Murphy, alongside her husband Stephen, has created a secure parking system for bikes with their company Cyc-Lok, which makes access-controlled modular bike-parking lockers. The company started in 2014 and since has won awards for its start-up and design.

“There’s still loads of ideas we have for the product and bringing it to the next stage with facial recognition and smart screens on the units, creating a much easier user experience as well, but at the moment it’s an app-based pay-per-use on-demand bike-parking solution,” says Murphy.

“My husband was an avid cyclist, he had a really nice bike and I suppose I got sick of looking at it under the stairs – he wouldn’t even put it out in the shed. When they did long cycles at weekends and they were in groups, someone had to look after the bikes: they couldn’t stay and have lunch anywhere; just nowhere to put the bikes. I suppose it started from there and then we researched the market to see what’s out there.”

“We had a very basic idea and we went to design company, Dolmen, with our wish list and what we’d like it to look like, something that really stands out. They got to work on it and came up with pretty much what we have at the moment and there have been a good few tweaks to it since. It just kind of evolved from basic locker with access control to a whole multi-user with a back-end app with payment system and management dashboard.”

There are 12 lockers in one system which takes up the same area as a car-parking space. Already in use in Dublin’s Heuston and Pearse train stations, the lockers have caught the eye of the Norwegian government, Murphy says. “We have units already in Stavanger in Norway. We sold them to the Norwegian government, they are looking to roll it out all over the country. The cycling officer from Norway flew over, I picked him up, drove him to Heuston station, showed him the units we have there and the order came in three days later.” The Murphys are currently speaking to the UK government as well.

Cyc-Lok also provides lockers for use on corporates’ own sites. They already have contracts with a global tech giant which is using the lockers on its site in Cork and soon Denmark and California.

“We sell to corporates, so they provide the solution for their staff. The benefit to them is they are encouraging healthier lifestyles for their employees but also they are reducing their requirement for car parking and creating a sustainable option.

“As well as that, if they have a bike-to-work scheme they are actually utilising their bikes, because it’s all very well the employees having all these fabulous bikes but the bikes are sitting at home and they don’t cycle them to work because they are afraid to leave them at work. They can access the units with their staff ID card or a fob,” says Murphy, who explained that the facilities manager can also run reports from the management dashboard, to see if cycling numbers are up or down and if employees are making use of the lockers, all from their mobile phones.

Murphy’s background involves 17 years in sales and marketing within the pharmaceutical industry, so it’s no surprise that they are securing contracts such as a nationwide service station chain, shopping centres and Dublin City Council.

The company’s involvement with their Local Enterprise Office in Laois has also added traction to their success. “They’ve been really supportive, we got a few grants from them for exhibition and for feasibility and then the courses that we are running that we get involved in. We went for the county award in Laois and then we represented Laois for the National Enterprise Awards and that’s where we got the award for innovation. They are really great for publicity and PR and I suppose it’s nice to be recognised for the work that you’ve done as well.”

She says the product’s development is timely, given that the Government is under pressure to improve infrastructure for cycling. “We just can’t take many more cars in the city, so they are looking at alternative modes of transport. There is a big buzz around smart cities and it’s all about better walking facilities, better cycling facilities better public transport and then connecting them all. The way we see Cyc-Lok going is we would have them in the train stations and the park and rides, so you’re getting people to cycle in from far away to come to a certain spot and maybe take the Luas or the train.

“It’s creating these multimodal transport hubs. We can then link in with any current cards, so you can use your Leap card to use a Cyc-Lok.”

The weatherproof lockers are made in Ireland using home-sourced materials too. “We designed all the tools, our aluminium extrusion company that supplies us is down in Cork and then we have our software and hardware coming from a company in Dublin, we have our doors and roofs coming from a company in Leixlip – all of our suppliers are Irish, all the companies that we deal with to produce the units are all Irish, we are quite proud of that,” Murphy says. 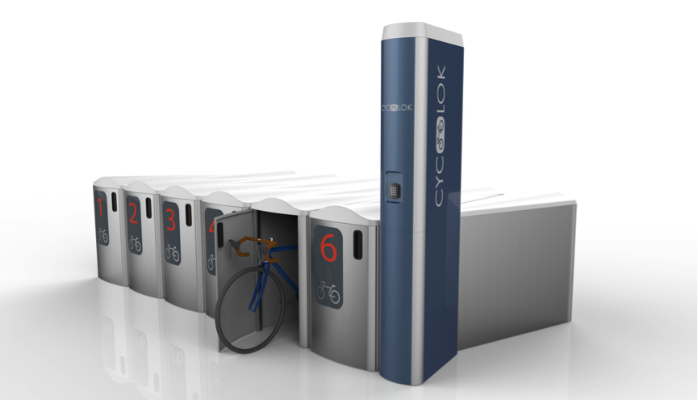