Stooped over the kitchen table in his semi-detached Somerset home, Laurence McJannet traces a highlighted-yellow line on a map with his index finger; watched by a nearby Tyrannosaurus rex. The map is dog-eared, its rips and wrinkles hinting at heavy use. The dinosaur is six inches tall, made of plastic and is altogether less relevant, yet belongs to either Leo, 11, Oscar, nine, or Jasper, four. 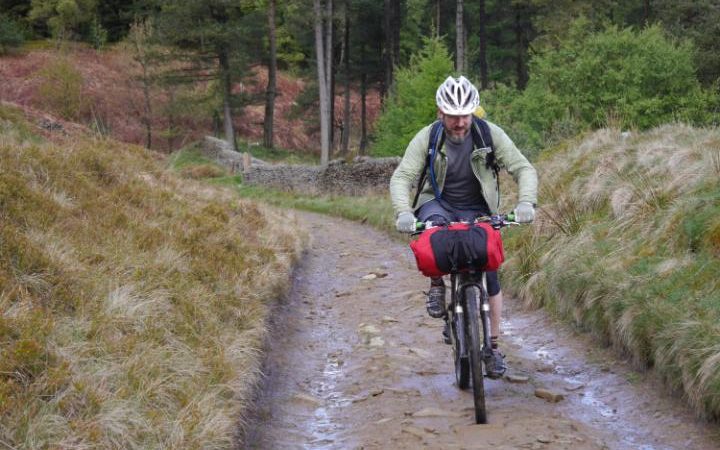 Bikepacking, for many, is a form of escapism

A stubbly, warm, silver-haired man of 42, McJannet folds the map delicately and places it in a pocket, before vanishing to the garden to retrieve bicycles for himself and his two eldest.

Once snacks are negotiated, backpacks assembled and hooded sweatshirts tied around waists (Mum’s orders), father and sons pedal away from the sleepy cul-de-sac and into the wilderness. They are going on an adventure.

Bikepacking is a fusion of mountain biking, cycle touring and lightweight camping

Though its history dates back as far as the 19th century, mountain biking’s modern era dawned in the Seventies – intrepid surfer types modifying their heavy cruisers with balloon tyres, gears and BMX-style handlebars, fit to withstand the dusty canyons and sprawling peaks of America’s West Coast – with the intervening decades seeing it explode from tiny subculture into mainstream passion. Now, in a cycling landscape which has seen BMX embraced as an Olympic event and our cycle lanes jammed withMiddle-Aged Men In Lycra, a new, off-road trend is emerging.

Bikepacking is a fusion of mountain biking, cycle touring and lightweight camping. Whether a means to explore areas unknown, test one’s mettle against the elements or merely unplug from the anxiety-inducing bleeps of 21st-century living, thrill-seeking enthusiasts across the United States, Canada and Britain are embarking on DIY cycle expeditions, saddled with no more luggage than they can safely carry on two wheels.

“It depends how wild you want to go,” admits McJannet, a cycling journalist turned stay-at-home dad, who has recently penned a book – aptly titled Bikepacking – a compendium of wild British trails, crammed with insight on gear, laws, camping spots, even decent pubs on each route. 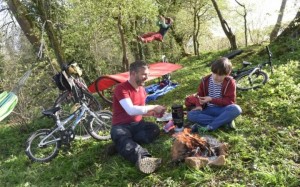 McJannet and his sons Leo and Oscar (swinging from rope) set up camp CREDIT: JAY WILLIAMS

“For a lot of people, just getting out into the hills, that minimal escapism, is enough to recalibrate your senses,” he says. “After just a 20-minute ride, you can feel like you’re in the middle of nowhere and have the quietest night and the clearest stars. It really is all around you.”

The bikepacking “scene”, then, is a pretty broad church. The aim of some bikepackers might be speed, others to bug out in the middle of nowhere, reconnect with their primal ancestry or take in the natural majesty on our doorstep.

Some eschew technology, others embrace it, utilising a multitude of apps and gadgets as manufacturers, too, get in on the act – crafting cycles with built-in storage space, all-terrain tyres, not to mention all-weather, handlebar-mounted GPS systems to keep them on course.

“More often than not I just use a map,” says McJannet. “It gives you a far better perspective of what’s approaching, where you’re heading and a general feel for the landscape. I often feel like what I’m actively trying to escape from is technology, so to bring it with you seems a little self-defeating … Apart from an electric ignitable stove – but that’s about as hi-tech as I get.”

As soon as we’re out and about, all thoughts of screens instantly vanishLaurence McJannet

For doting father McJannet, what started as a method to catch up with a friend or embrace the often untapped wealth of the British countryside by going temporarily off-grid has become a gateway to something much more important: bonding with his young children.

“It’s really beautiful,” he says, “to have that unfettered time where we’re not arguing about Minecraft or YouTube. It’s a world away from the daily routine, and it’s nice to leave all that at home. At first I thought they’d be pestering me to see when we can get home, but as soon as we’re out and about, all thoughts of screens instantly vanish. The boys really love it.”

Following a rundown of the route’s finer points during the kitchen table summit, I join McJannet, Leo and Oscar a mile or two outside of Frome, as it ticks towards dusk one Tuesday afternoon.

The countryside’s pungent aroma (a heady blend of freshly bloomed flowers and manure) hangs in the air, and I’ve been lent a single-speed aluminium bicycle for the occasion. Our route is a “highly abridged” version of a meandering, scenic cross-country ride called “Avon Calling” from McJannet’s book (the boys have school tomorrow).

Of course, as McJannet notes “there’s only so far the boys’ legs will carry them” (the less said about this writer’s cycling skills the better), our path was picked for its combination of ease and locality, as it pales in comparison to some of the book’s more gruelling, monster trails. The longest – “Break for the Border” in North Wales – is a colossal 192.6 miles, earning a maximum five-star difficulty rating. 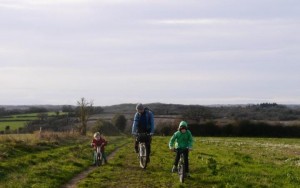 A few hundred yards in from the roadside in Frome, within a secluded patch flanked by trees and overlooking a reservoir, it’s time to set up camp. McJannet threads rope around a tree, attaching karabiners to erect a hammock. Leo gathers logs for the campfire. Oscar – the nine-year-old “loose cannon” – dangles from a rope swing and declares that he is Tarzan.

While McJannet and co aren’t laden with heavy bags, the variety of kit that materialises from what was strapped to either our backs or bicycles is impressive. A tarpaulin shelter is hammered into the ground, bivvy bags – compact, lightweight alternatives to a tent – produced.

As firelighters and balled-up bits of newspaper are ignited over kindling, the boys are ordered to empty their lungs into two blow-up mattresses, and within minutes the tranquil calm is replaced with smoke-tinged excitement as we huddle around the fire, hovering sticks above the flames to toast marshmallows. Next, after heating water on a portable stove, it’s hot chocolate all round.

When bikepacking solo, McJannet claims his gastronomical endeavours are limited to “easily rehydratable stuff” like noodles and pasta. Yet sustenance can take on a touch more flair when he’s entertaining.

“I’ll get a little more experimental,” he grins, “taking little zip bags I’ve prepared the night before. On a couple of occasions I’ve been able to catch crayfish, shell them, boil them and have them with some noodles. Just knowing you’ve supplemented your food with something you’ve caught yourself is amazing – it taps into some primal urge.” For all its strengths, bikepacking does come with its share of pitfalls. Disappearing into the wild with scant supplies is a feat one should never take lightly, even for the most courageous or practised rural explorer. And although McJannet proudly espouses the scenic beauty of Great Britain – the book itself is largely a love letter to the countryside – he readily confesses that the large majority of the land is spoken for.

“I’m not encouraging trespass in any shape or form, but the bottom line is that 90 per cent of England is in private hands,” he says. “So the chances are you’ll always be on someone’s land, it’s just whether you’re remote enough to go completely unnoticed. In an ideal world you’d find the landowner and ask their permission, but more often than not it’s impossible to know or find out.”

Among the book’s greatest benefits is its functional insight into laws and quirky statutes. The 2003 Land Reform Act, for example, restored the right to camp throughout Scotland. And simply carrying a trowel (technically for bait digging) can grant you shore-side lodgings – something enshrined under Magna Carta in 1215. Of course, if all else fails and a landowner orders a bikepacker to up sticks from his field, the allure of currency is apparently quite reliable. 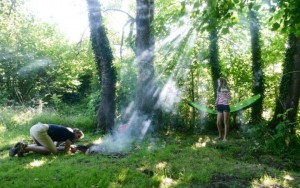 “I’ve never had anyone turn down a tenner,” laughs McJannet. “If you explain to them what you’re doing, that you’ll leave no trace and will be gone by morning, nine times out of 10 they’re OK with it.  Some are even flattered you chose their land.”

Back camp-side, the fire is roaring, yet the daylight is starting to fade and it’s nearly time to push off. The boys don’t want to leave. They’d gladly stay the night in their bivvy bags – after battling for first go in the hammock – before packing up and riding to school, their clothes heavy with the charred perfume of campfire. As Leo says: “It’d be a story to tell my friends.”

“OK, we can stay here for a bit longer, boys,” says McJannet, offering a compromise. “Well, unless there’s any homework to be done?” The boys’ faces light up; smiles abound. Oscar reaches for the marshmallows.